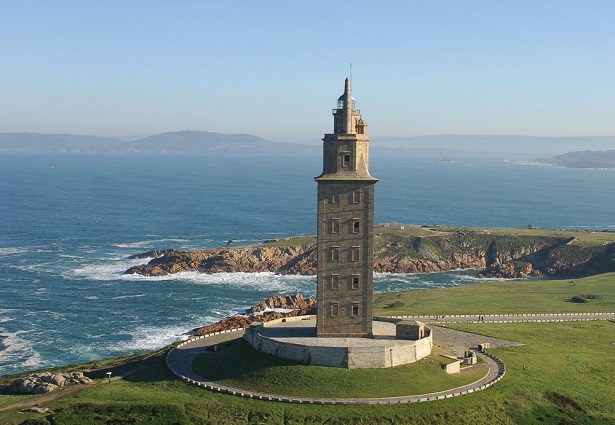 A Coruña is a Galician city that has about 250,000 inhabitants. City of the sea, there are several beaches that it has, all of them preceded by a spectacular Promenade of about 10 kilometers in length. The main beaches are Playa del Orzán and Playa de Riazor , separated only by a wall that rises up in the sand. Next to the beaches, the Riazor Stadium , where RC Deportivo de A Coruña plays, a city team that plays in the First Division. Next to it, a pavilion where the basketball, indoor soccer and roller hockey teams play, the latter winner of several national and international titles.

If there is something you should visit in A Coruña, it is the Tower of Hercules , the oldest lighthouse in the world of those that are still in operation and that guides a number of ships that approach the Galician coast. Symbol of the city, last year it was declared a World Heritage Site. You can climb to the top, from where you can see spectacular views of the city and from where you will take the best photos. The Plaza de María Pita is another of the places of interest in A Coruña , there is the Town Hall and the monument in tribute to the woman who fought against the English so that the city would not be lost. From there you can access the pier where there is a large Shopping Center and the typical houses with galleries. From the central area of ​​the Plaza, you can go to Calle Real , the most emblematic street in the city and where you will find a lot of shops and street artists. At the beginning of this street there is a craft trinket shop that is a real wonder.

📖  The most beautiful coastal towns in Alicante

The Plaza de Cuatro Caminos has a beautiful fountain with the same name and that is where the city’s soccer team celebrates its achievements. Very beautiful to spend an afternoon are the Jardines de Méndez Núñez, where throughout the year several Fairs such as crafts or communities are held and which always have a few attractions for the little ones to enjoy. Opposite is the Obelisk, another of the emblems of the city and it seems that it will soon be moved. The Market of the Plaza de Lugo , the Plaza de Pontevedra , the Calle Barcelona , the Monte de San Pedro or the Old City are other places that every tourist should visit in A Coruña. In terms of culture, the Casa de los Peces , the Museum of Man and the House of Sciences stand out , which is within the Parque de Santa Margarita price tag.

📖  Natural Monument of the Sequoias of Monte Cabezón in Cantabria