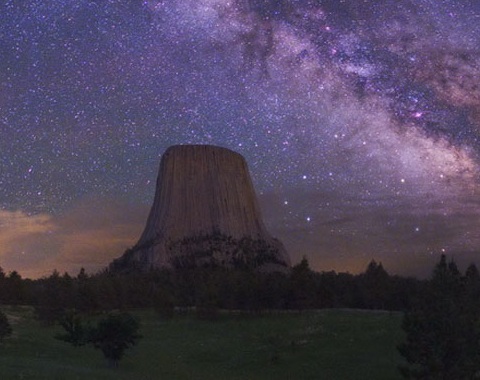 The Devil’s Tower is a peculiar and imposing formation that rises up to 386 meters above the ground. It is located in the state of Wyoming , and was declared the first US National Monument in 1906 by President Roosevelt. It is a famous place for its appearance in some films such as "Encounters in the Third Phase" by Seven Spielberg.

Its name comes from an Indian legend that said that on the top of this mountain, the "god of evil" beat his drums to imitate thunder. In this way, he frightened the entire region. There is another legend that its gigantic vertical striations were created by a huge bear. However, from a geological point of view, it is known that it has been the erosion of the wind and the water that has been shaping and creating this very peculiar shape of the structure.

The origin of this mysterious mountain is still uncertain. There is a hypothesis that it is a hardened lava column . Which would never have reached the surface to become a volcano. Previously this formation was surrounded by a lighter rock, but over the years this layer has been eroded to finally give rise to this spectacular tower .

It is a truly spectacular place and its surroundings are particularly striking, in which a multitude of hexagonal columns can be seen that have been appearing due to the condition of magmatic intrusion of the terrain. Although it is surrounded by a protected park of approximately five square kilometers, unlike most international landscapes of these characteristics, climbing is allowed.

📖  Five things to do in Iceland