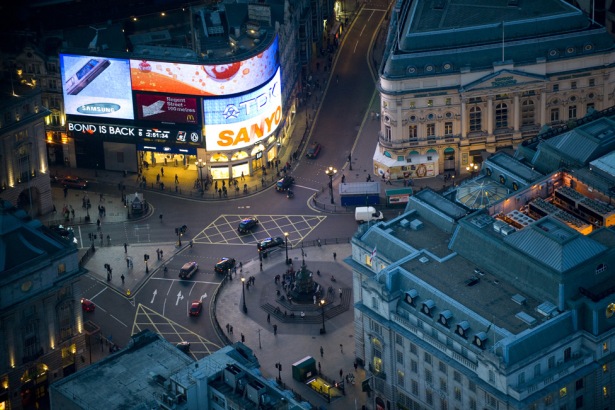 Piccadilly Circus is the most famous square in London , with the permission of Trafalgar Square of course. It is in the West End area , in the district of Westminster. You will recognize it immediately by that curved corner with the large lights of different electronics companies and that appears in so many films that you have seen. To get there, you have the Picadilly Circus tube station right there, or you can go to Oxford Street and take a walk along Regent Street to reach your destination. In addition, Regent Street is one of the most famous streets in London for its shops, and it also has a bar that is just like the one in the Cheers series, with photos of the actors there and everything.

Once in Picadilly Circus you have a multitude of options to choose from, you can go into a store, have your picture taken at the famous Memorial Fountain in the middle of the square, eat in one of its restaurants (an Italian who works in buffet service is especially recommended. Great!) or take a photo at the famous Ritz Hotel. In the southern part of the square you also have the Criterion Theater , a very nice venue that you can take advantage of to see a play if they have something on the bill.

In the surroundings of Picadilly Circus you can stop by the London Pavilion , a music hall converted into a movie theater and finally reopened as a shopping center together with the Trocadero Center and thus forming a spectacular place where you can not only buy but also have a game in some of the many machines they have in a recreation center. It’s called London Trocadero and it’s connected to the tube.

From Piccadilly Circus you can head to Hyde Park , Soho or many more areas of London. An obligatory stop if you are going to visit London .