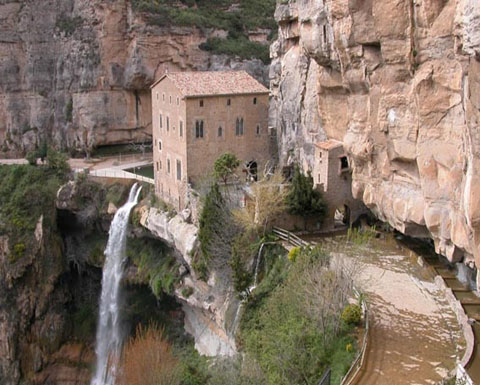 Historically, Sant Miquel del Fai dates back to Neolithic times, although the first written references date from the year 997. Apparently, its origin could be that of a space destined for pagan cults, although it has not been possible to specify when this singular was built church-cave .

It was donated in 997 by the counts of Barcelona to Gombau de Besora, to build a monastery, which was inhabited by monks until 1835.

Although its historical importance is remarkable, the uniqueness of Sant Miquel del Fai is also due to its surroundings . The water from the Rossinyol and Tenes rivers, from the rains and the thaw, make up its spectacular location, between waterfalls and small lakes. Each season of the year, the scenery varies, conferring fabulous natural beauty around the church.

📖  Hayedo de Montejo, one of the most beautiful forests in Spain

The Caves of Sant Miquel and de las Tosques , a product of the action of water on the rock since ancient times, have impressive formations of stalactites and stalagmites inside.

Travertine is another curious element that can be observed very closely. Born by the effect of the carbonate of the water that filters through the cracks in the rocks. The result is fabulous vertical plates attached to the rock.

In addition to the wild natural beauty of the landscape, in Sant Miquel del Fai we can visit:

La casa del Piorato – Gothic in style, this building has two floors and an attic. It stands out especially for its location, on top of a ravine and for its characteristic lobed arch windows, divided by one or two columns.

Sant Miquel Church – It is the only Romanesque church in the country built entirely in a cave . Although it dates from the 10th century, the presbytery belongs to the 15th century Gothic, and the tombstone of Guillem Berenguer that is inside it dates from the year 1000, approximately.

Hermitage of Sant Martí – About 800 meters from the monastery, is this hermitage of Romanesque style (9th century).

Restaurant – In this spectacular location, you could not miss a sample of the most international Catalan cuisine .