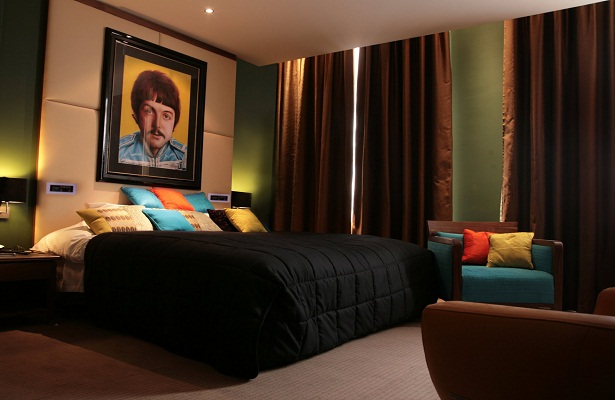 The theme hotels are a trend that is becoming increasingly popular and there are even people who organize their functions depending on the theme hotel they want to visit. You can visit hotels that have each room of a color, others that have prisons as a central theme and you will feel as if you were in one, other ecological and others based on cinema or music. The one that I bring you today is one dedicated to The Beatles . It’s called Hard Days Night, and of course it’s in the group’s hometown of Liverpool .

The hotel is ideal for fans of the group, and also for curious people who want to live a different experience thanks to the group that invented the fan phenomenon and that was the first to move so many people around the world at the end of the 60s. It is in an old building but very well preserved. It has 110 rooms, two of which are what we could call VIP. It is a four-star category.

📖  The stars of the hotels

In the hotel of the Beatles you can discover an authentic museum of the band, with many objects that belonged to its components, as well as paintings, photographs and all kinds of press clippings and information. It goes without saying that all this material is distributed and organized in the safest way so that no one can even try to take it away, that obviously any fan would want to have a John Lennon brush at home, for example.

The hotel is located on Mathews Street , very close to The Cavern , the club where they took their first steps and where you can also find multiple objects that belonged to McCartney and company. But the thing is not there, the truth is that soon they could inaugurate the Beatle city, since near there there is also a chapel where you can get married in a very special way. It’s called Let It Be . An experience for the true fans of the group and a new way of traveling for any curious person who wants to get closer, even if they are not a fan.

📖  Picadilly Circus, the most famous square in London