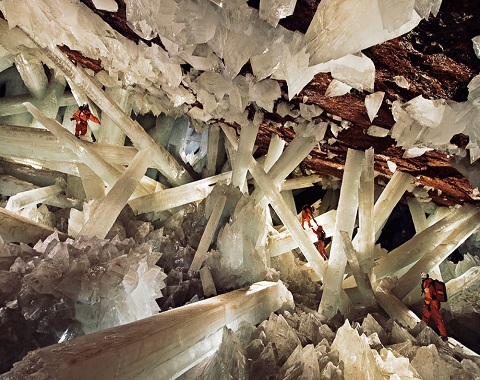 At 300 meters below the ground, nature hides one of the most impressive places in the world. A unique wonder on our planet, of great beauty and extremely important geological and scientific value. It is the Cueva de los Cristales, which is located in a mine in the south of the state of Chihuahua, north of Mexico . Quiet and silent, it hides in its interior spectacular and huge crystals of selenite or "moonstone".

One of the most important geological discoveries in the world, both for science, technology, art, philosophy and nature itself. Its selenite crystals are of dimensions never seen before . Most are about six meters in length, some of them reaching eleven meters. The temperature inside is about 45-50 degrees Celsius, and the humidity percentage ranges between 90 and 100%. A logical environment for the depth at which it is, but on the contrary, it contrasts with its ice appearance.

As expected, knowing these humidity data and its high temperatures , the Naica Crystal Cave cannot be visited . It is impossible for humans to survive inside for a period of time greater than two hours. But in addition to the extreme heat conditions, another factor that influences the caves not to be touristy is the fragility of their crystals. However, the possibility of opening them to the public is being studied, guaranteeing both the protection of the cave and the safety of the people.

A natural setting , whose beauty and dimensions captivate all those who have had the opportunity to be there. The brilliance and transparency of its huge crystals create an environment totally different from what we are used to seeing on the earth’s surface. The Cave of the Crystals is an example of admiration for nature.