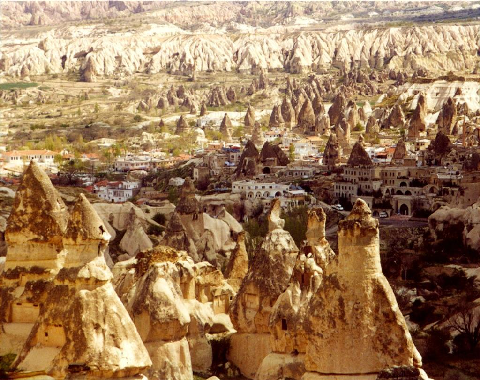 In the Turkish region of Cappadocia is the village and valley of Goreme. A landscape so strange that it seems to be taken from a story, but it is real. Although it seems that the place had been designed by an artist, the molding of its plateaus are the result of the natural erosion that they have suffered for thousands of years. It is a magical place surrounded by mountains with whimsical shapes.

The place has been recognized as a World Heritage Site. Thus the Goreme National Park has become a unique landscape in the world. Its rounded mountains in which you can see the fairy chimneys (rocks of elongated shapes that have been created by the erosion of water and wind), make the place have a certain resemblance to the lunar landscapes . In general, the region has a very eroded volcanic terrain in which these curious formations are created.

In addition, along this valley you can find numerous constructions that were excavated in the rocks back in the 3rd and 4th centuries. Countless houses, temples and monasteries, even connected by tunnels, and inside which there are also various Christian frescoes from the 11th and 12th centuries, all of them of great beauty.

Apart from the landscape, the incredible thing about the place is therefore the ability that all those inhabitants of the region had to dig and build inside these mountains. There are even some houses that were built directly underground, with underground labyrinths protected from the enemy. Both in the city of Kaymakli and in Derinkuyu , you can visit this type of housing. Currently you can explore both these cities and all the houses, caves, monuments and temples of the place.