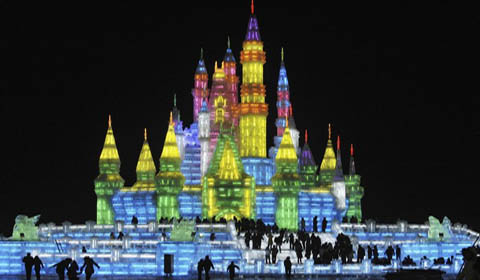 In Harbin , the capital of China’s northernmost province , the Ice Palace Festival takes place every winter. Starting in January, the city welcomes the works of professional or amateur architects and sculptors from all over the state and from other countries. For more than three months, the people collaborate with the participants to transform the central Zhaolin Square into the setting of a fairy tale.

In December, work to extract large blocks of ice from the Shongua River usually begins . Construction workers, peasants, volunteers and onlookers dedicate themselves to this hard task so that the expert hands of the contestants sculpt the petrified water as if it were mud.

Tens of thousands of visitors from around the world flock to Harbin each year to admire these monumental sculptures , as well as the thousands of smaller works scattered throughout the city. A jury is in charge, from day one, of evaluating the works and awarding the prizes , although the majority of sculptors who participate in this event do so simply out of sheer hobby.

This tradition dates back centuries, although it was from 1963 that the custom of awarding a cash prize to the most beautiful works began.

The arrival of night turns the city into an incredible spectacle . Hundreds of neon lights merge with the beautiful transparency of the ice, turning Harbin into a true city of fantasy .

After this experience, a visit to the rest of the city allows you to admire the Russian influence in the area. There an Orthodox church stands as the greatest exponent of this religion in all Asia. The influence of the neighboring country can also be appreciated in the souvenir shops , where you can buy typical products such as vodka.