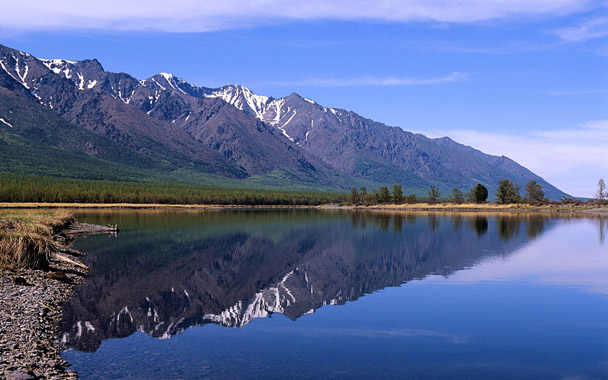 It is Lake Baikal and it is so beautiful that it is also known as The Pearl of Asia . Of course, it deserves the name, as it is one of the most incredible natural wonders in the world. The largest freshwater lake in the world and also the deepest. In fact, it appears to contain 20% of all the fresh, unfrozen water on the planet.

It is in southern Siberia , in Russia, very close to the city of Irkutsk, and it is a large lake of volcanic origin, no less than 636 kilometers long, 80 kilometers wide, and 1,680 meters deep. It is not surprising that in 1996 UNESCO declared it a World Heritage Site .

Lake Baikal became known thanks to the construction of the Trans-Siberian Train , whose route runs along it in part. As a curiosity, I will tell you that 200 bridges had to be built and 33 tunnels dug. All the figures surrounding this lake are surprising, right?

To the north are the Baikal Mountains , which are recognized as a National Park, and which offer a spectacular natural environment. In addition, the lake has about 22 small islands, of which the largest is the island of Olkhon .

But one of the things that really defines Lake Baikal and endows it with great interest, in addition to its great scenic beauty, is its biodiversity . In its surroundings, no less than 1,550 animal species coexist, among which the Baikal seal stands out. And at its bottom there are about 233 varieties of algae, in addition to 1,085 species of plants. A wealth difficult to find.

📖  Space tourism is already a reality

On a tourist level, visits to Lake Baikal have increased in recent times. The nearby city of Irkutsk can be a good starting point to get there. If you like hiking, you will love a visit to the lake because the Great Baikal Trail extends through its surroundings, a network of trails that allow you to enjoy the nature of the environment and its unique views.