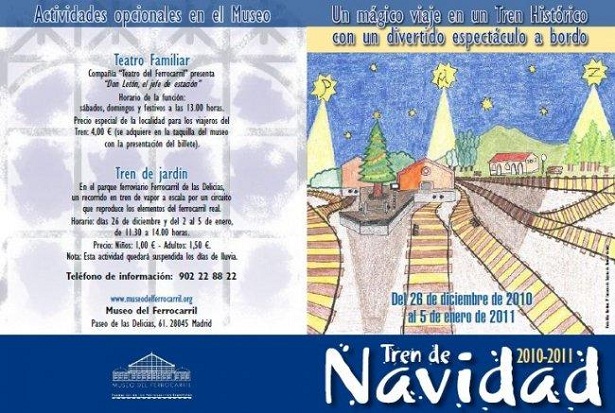 Christmas is here and, like every year for 18 years, the Madrid Railway Museum is dressed in lights, and never better said, so that children and adults can enjoy something different these days … the Christmas Train. It will be operational from Sunday, December 26 to January 5, Three Kings’ Eve, although on day 1 it will take a break, fully deserved since that day is to rest. The Madrid Christmas Train has both the departure and the arrival at the Delicias station , which is where the Museum is, and will circulate through the city’s railway network, passing through stations such as those of Príncipe Pío, Chamartín and Atocha, three of the best-known and busiest cities in the capital.

📖  Hotels for wine tourism in Spain

But the most interesting is yet to come, since during the journey, which lasts about an hour and a half, there will be a theater show and even a royal page will appear to collect the letters that the little ones (and also the older ones!) have written to the Three Wise Men with all their requests for that special night of the year where everything is illusion and magic. The most special trip will arrive on January 5, since the Three Wise Men will also make the trip to be able to photograph themselves with the little ones and read the letters that they themselves have written.

📖  The most famous cemeteries in Spain

When the trip comes to an end, travelers will be able to access the permanent exhibition of the Railway Museum and witness another play that will take place inside the cultural center. To get to the Railway Museum , you can do it on metro line 3, stopping at Delicias station. If you go by bus you have lines 8, 19, 45, 47, 59, 85 and 86. In the Cercanías, lines C10 and C7b.