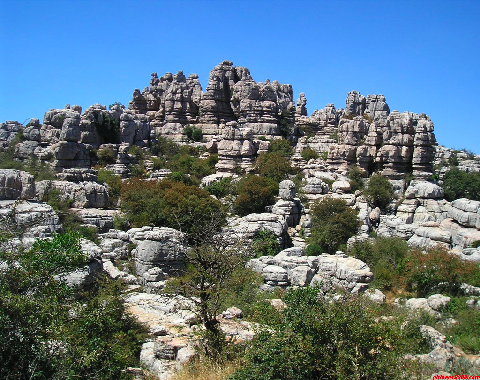 El Torcal de Antequera is an incredible natural setting. Its beauty lies in its surprising limestone rocks that, having been eroded by wind and water for thousands of years, have curious and varied shapes. It is located in the province of Malaga , 8 km south of Antequera, and constitutes one of the best karst places in Europe.

El Torcal is made up of limestone rocks, whose origins date back to one hundred and fifty and even two hundred and fifty years ago. At that time it was a long maritime corridor that went from the Gulf of Cádiz to Alicante, thus communicating the Atlantic Ocean with the Mediterranean Sea. With the passage of time, the force of the terrestrial folds was causing the limestone sediments deposited on its bottoms to emerge to the surface.

📖  The most beautiful museums in the world

Subsequent fractures were the cause of various cracks and faults that, when sinking, created the alleys . From here on, the place was subjected to the erosion of the karst complex. In this way, these curious shapes that we can enjoy today have been created over the years.

But in addition to all this, the place has an impressive wealth of flora and fauna . Rabbits, wild cats, foxes, badgers and goats, as well as griffon vultures, eagles, hawks or royal owls, are some of the most abundant species in the area. In fact, El Torcal has been declared a Special Bird Protection Area and was the first Andalusian Protected Natural Area, later declaring itself a Natural Park . Thus, its great geological and landscape value is recognized, as well as its important flora and fauna.

📖  The most famous waterwheels in the world