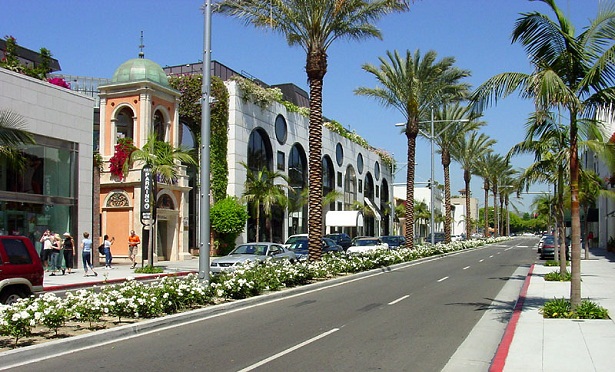 Beverly Hills is one of the most famous, luxurious and glamorous areas of Los Angeles and is located under the Santa Monica Mountains, with the famous West Hollywood neighborhood to the east. Many celebrities and great movie stars live here. Although it seems like a dream, here it is possible that while you are taking a walk or having a drink on a terrace you can meet people like Robert Redford, Leonardo DiCaprio, Julia Roberts, Jack Nicholson, Brad Pitt, Tom Cruise and so on until completing a huge list of Hollywood actors and actresses who have their mansions in Beverly Hills.

One of the best-known areas of Beverly Hills is Rodeo Drive , a three-block area that houses the most exclusive and luxurious stores in the world and that you will know it from cover to cover if you have seen Pretty Woman , since that is where Julia Roberts and Richard Gere were going shopping. If you liked the movie, you can also visit the Regent Beverly Wilshire Hotel, where its characters stayed and which is at the south entrance of Rodeo Street. It is not very expensive, so you can even feel Julia Roberts and remember that fantastic scene with headphones in the bathtub.

📖  The most important cities in the world

If you are going to visit Beverly Hills, surely one of your reasons is for the movies and the famous. There are several companies that offer you a route through the most spectacular mansions, can you imagine seeing your favorite movie star take out the trash? You can also enjoy various excursions and tours of the places where various series and films have been recorded, and it is more than likely that in any corner you will find the filming of a Hollywood blockbuster, be it a movie or a series.

The nightlife in Beverly Hills is also very lively and every day you can meet not only street musicians but also several clubs where there is live music, you can even catch a private concert by an international star. In Beverly Hills anything is possible.

📖  The best casinos in Las Vegas