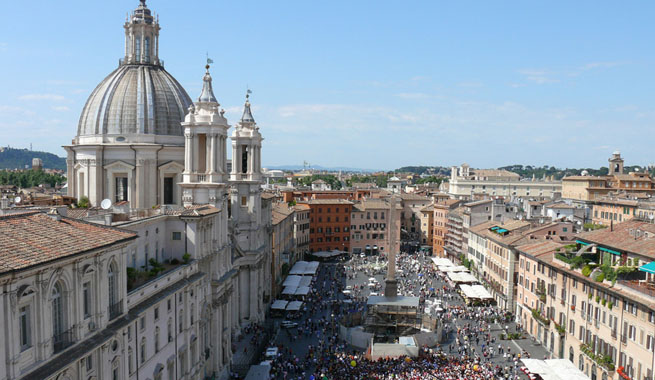 It is probably the most spectacular square in Rome. Magnificent, baroque , beautiful … It is always abuzz with people, as tourists visit it constantly. And it is not strange, given its beauty.

Piazza Navona is one of the most important Baroque works in the city. It is surrounded by ocher-colored buildings and stately architecture, and bordered by three impressive fountains . Once you have visited it, you will surely want to return to it before leaving the city. And it is that this place catches the visitor from the first moment. 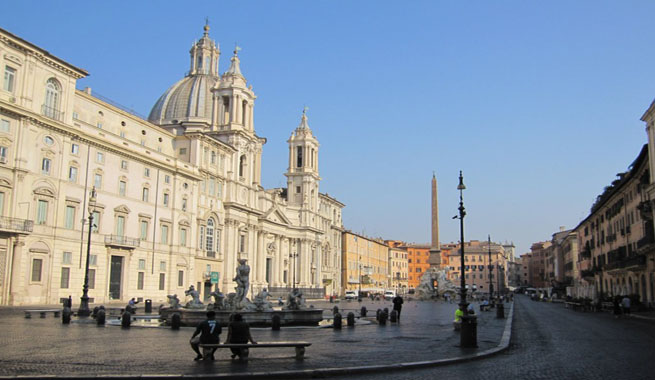 The square has an elliptical shape, just as the stadium and the circus were built by the Emperor Domitian on the site back in the year 86 . At that time it was known as Circus Agonalis , a name that in the Middle Ages derived from in agone and later to n’agone until reaching the current Navona .

In the western part of the square stands the Sant’Agnese in Agone church, one of whose architects was Borromini. One of its greatest rivals, the baroque genius Gian Lorenzo Bernini, was commissioned to create the central fountain of the square, the Fontana dei Quattro Fiumi (Fountain of the Four Rivers), in 1648. Its four main figures represent the four rivers of paradise : the Nile, the Ganges, the Rio de la Plata and the Danube, and also to the four known limits of the world: Africa, Asia, Europe and America. A marvel.

📖  Around the world in a private jet

But do not miss the other two fountains in the square: on the north side the Fontana del Neptuno , which represents the sea god fighting with a serpent, and on the south side, the Fontana del Moro , by Giacomo della Porta.

Piazza Navona is one of many places in Rome that are always full of people. There, tourists mingle with artists, vendors and passers-by who circulate through it. And is that having a coffee sitting on one of the terraces of the premises of the square is a real luxury, not cheap, by the way. Strolling through the square when night has fallen is delicious, although if you do, you will find it as active and busy as it is during the day.

📖  The cheapest rental houses for summer 2014