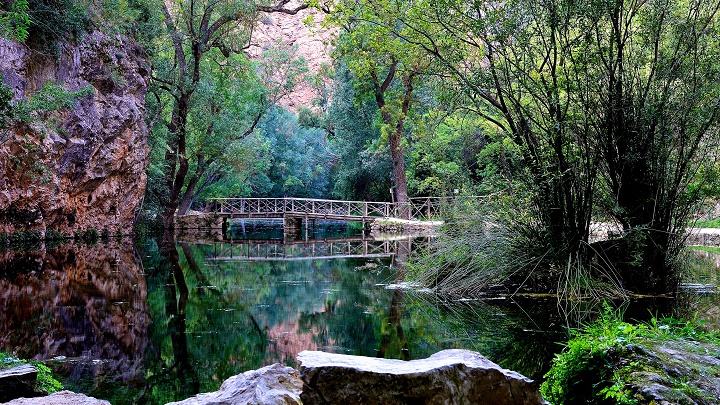 We move from Barcelona to Nuévalos , a small town of just 350 inhabitants that is about four hours away by car. From there you have to take a road that takes you to the Monastery, where you quickly go from the stress of the big city to the calm of a magical space that conquers you from the first second.

History and important facts about the Stone Monastery

The Piedra Monastery began to take shape when 12 Cistercian monks left the Poblet Monastery to settle in the old Piedra Vieja castle in the year 1194. The construction of it lasted through three different stages: primitive Gothic (13th century ), Gothic Renaissance (16th century) and Classical-Baroque (18th century).

The monks occupied the premises of the Monastery in 1218, so very soon it will be 800 years of history of a place that has been cataloged as a Site of Cultural Interest and Asset of Cultural Interest in the category of Monument. In addition, in 2011 he was awarded the Medal of Tourism Merit by the Government of Aragon.

An important moment in the history of the Monastery of Piedra has to do with what happened after the confiscation of Mendizábal in 1843, when Pablo Muntadas Campeny took over the convent buildings and adjacent estates through a Public Auction paying 1,250,000 reales. Years later, Juan Federico Muntadas , his son, was the architect of the landscape revolution of space, giving up building textile factories to bet on sustainable tourism. That is why as soon as you enter the Park there is a bust in his honor. 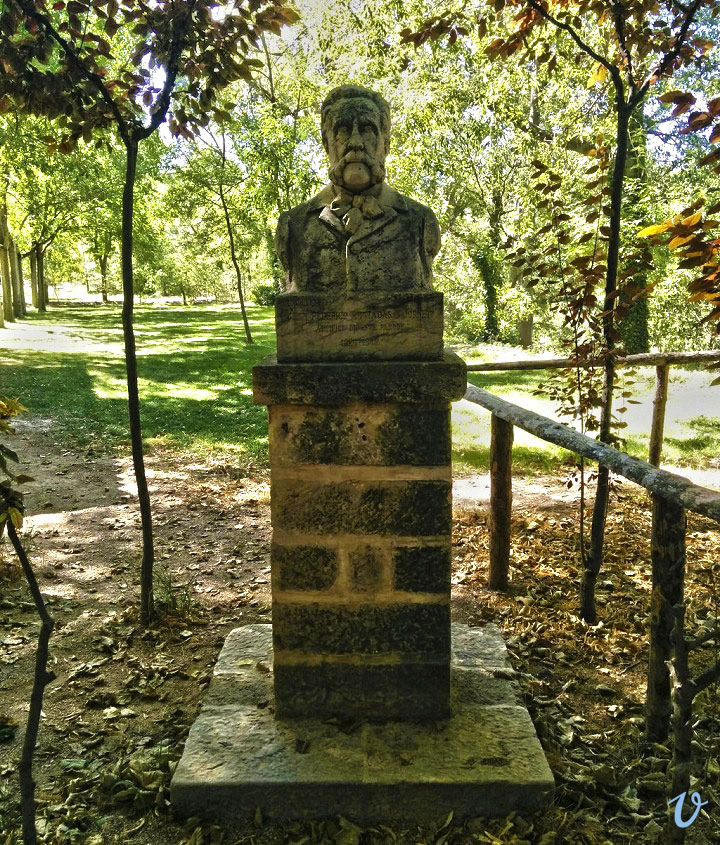 The hotel, or rather the monastery, transports you to another era. You can spend the night as if you were in the Middle Ages and wake up to the pleasant chirping of the birds, who say good morning to you with their trills. It is a sensation that is worth experiencing with your eyes closed, taking in air and slowly releasing it to enter a state of total relaxation . 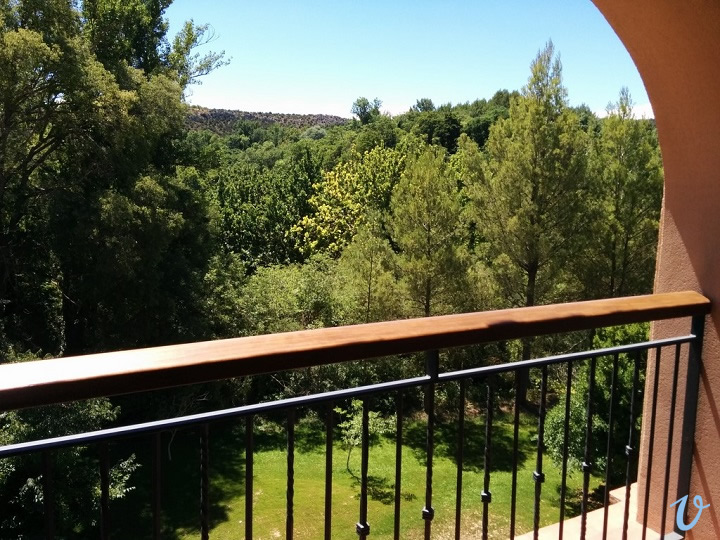 There are 62 rooms divided into Double Standard, Double Superior and Junior Suite. The latter can sleep up to four people, while the double, as its name suggests, are for two people.

There is also a plenary room (refectory in the 13th century), two modular multipurpose rooms, the Río Piedra room, the La Biblioteca room and El Granero, which is an ideal space to have a drink in a relaxed way. All this without forgetting its magnificent spa of more than 500 square meters and the pool. It offers you a dip surrounded by greenery, breathing fresh air and sunbathing on sun loungers that enjoy the silence that is not found in most swimming pools. 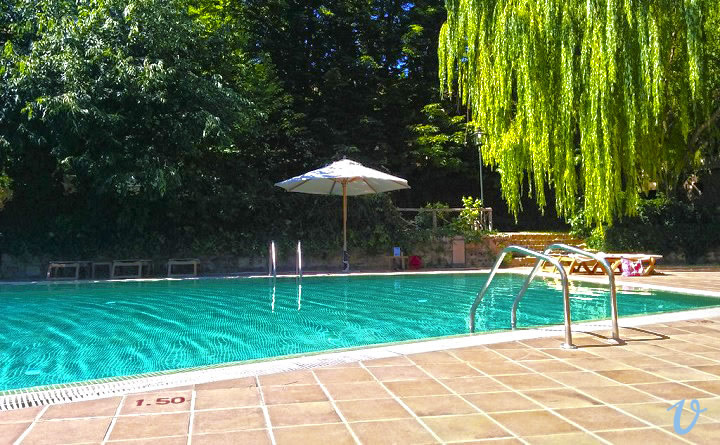 Returning to the interior of the hotel, it should be noted that it feeds on Cistercian art with details as spectacular as that of its 16th century Renaissance staircase. It is a kind of history museum in which there is also room for current needs such as watching television or connecting to the Internet with free WiFi.

At lunchtime there is no problem. Without leaving the Monastery of Piedra one can enjoy the Reyes de Aragón and Piedra Vieja restaurants . The first is more select, with delicious dishes at a reasonable price. When we went in the evening there was a very complete menu for 24 euros. The second, for its part, has a more extensive menu, although with less elaborate dishes. The menu cost us 13.50 euros and the quality is acceptable. Also, the service is very fast.

If you are looking for a place to have a drink, you can go to the El Granero bar-cafeteria, the Gaufrido bar-living room or the terrace of the Piedra Vieja restaurant.

To finish talking about the hotel, it must be said that weddings and outdoor events are organized at the Monasterio de Piedra Tourist Complex. The space is perfect to indulge in the "yes I do" in the old Abbey, which has a special charm because of being half destroyed. The capacity of the old monks’ dining room is 175 people, while the Cloister of the Monastery holds 250 people. 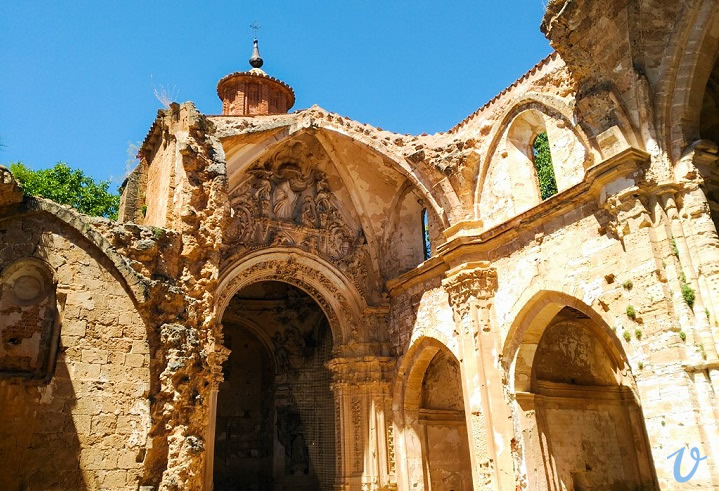 Ephemeris around the corner

As I have commented previously, 2018 will not be just any year. It will be 800 years since the Ceremony of Translation and physical occupation of the Monastery buildings by the monks who arrived from Poblet took place. In addition, it will also be 175 years since Pablo Muntadas bought the Historic Complex. That is why they are preparing activities with which to surprise tourists who come to the Stone Monastery at that time. The truth is that they are very excited.

They are not the only ephemeris to come. In 2017 it will be 150 years since the inauguration of his fish farm , which is the first in Spain and was commissioned by Juan Federico Muntadas, who wanted it to be next to the Piedra river. Why? Well, because it is an ideal place to cultivate and produce various species. In addition, it is of a captivating beauty.

The Monastery of Piedra passed into the hands of the MONASTERIO DE PIEDRA SA in April 1933. It is one of the oldest companies in Aragon and its objective is none other than to preserve, remodel, restore and beautify both the Historical Monument and the Park. Among some of the most outstanding actions in recent years, we can highlight the improvement of the access to the Vergel (the Monastery Park), the rehabilitation of the Plaza de San Martín (where the hotel and the Monastery are accessed), the restoration of the 16th century ribbed vault of the old monastery or the rehabilitation of various floors in the Abbey Palace. 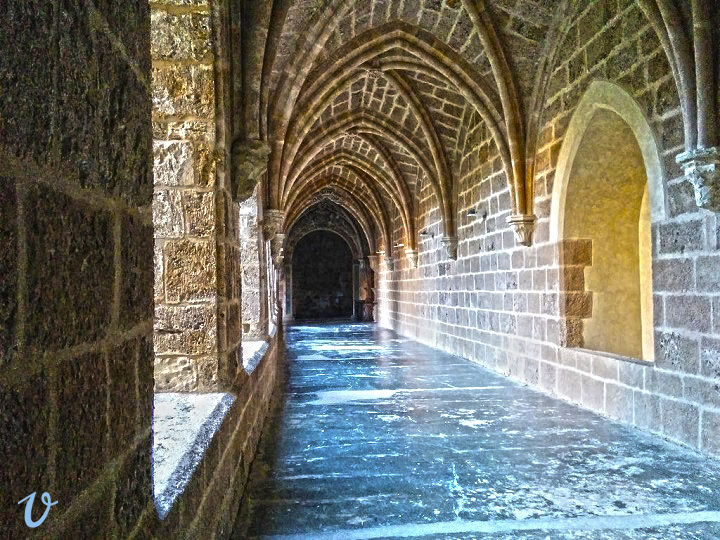 To all the above, we must add what they are doing on a cultural level, since the visitor can enjoy the carriage exhibitions and the History of Chocolate , as well as knowing how the monks produced wine for their own consumption and to sell it both in Calatayud as in Daroca, two very close towns. In this way they could buy what they were not capable of supplying themselves with. There is also a Reliquary Altarpiece that is worth contemplating carefully as it is a very representative example of Mudejar Gothic.

📖  How can I find out what type of accommodation suits me?

The Park, the perfect place to escape

The main course, at least for the vast majority, is undoubtedly the Parque del Monasterio de Piedra . There you can spend two and a half hours, a whole morning or the whole day if you want. It is open in winter from 09:00 to 18:00 and in summer from 09:00 to 20:00. Prices are as follows:

The price includes the entrance to the Park, the exhibition of birds of prey and a guided visit to the Cistercian Monastery. 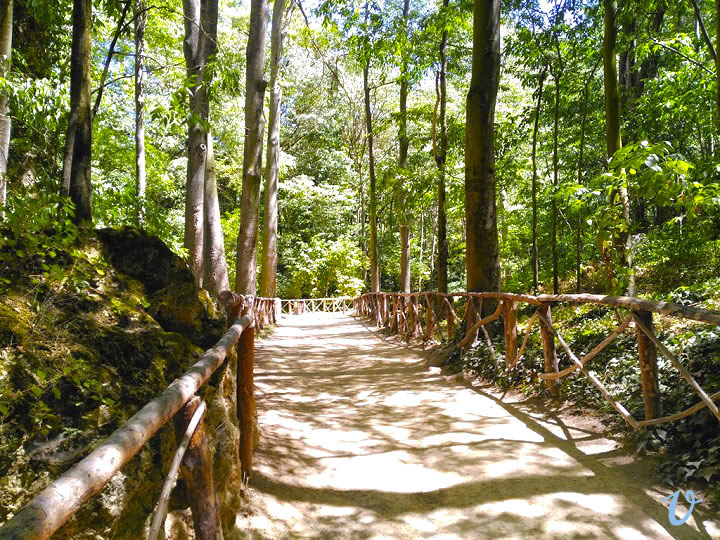 One of its main attractions, which of course we did not want to miss, is the exhibition of birds of prey that takes place between spring and autumn. It allows you to witness the flight of hawks, vultures, owls, eagles … They are species that are raised in captive breeding centers. The schedules are as follows: 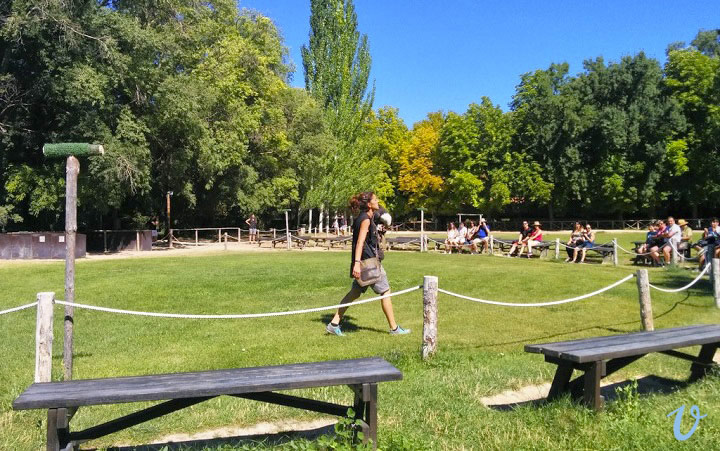 It was the first thing we did as soon as we got to the Park and we really liked it. Then, we start the tour, which lasts approximately two and a half hours at a normal pace.

Diana’s Bath is the first thing that surprises you. It is a beautiful waterfall that allows you to see in the background another waterfall that is even larger. This is La Caprichosa , one of the most beautiful I’ve ever seen. Contemplating it is a gift for the eyes, but also for the ears.

The trails take you to new waterfalls and invite you to enter caves like Iris . You may get a little wet, but it is worth bringing out that adventurous spirit that we all carry inside to enjoy landscapes that are not seen every day. The photo that you can see below shows how the water falls from the highest waterfall in the Park. 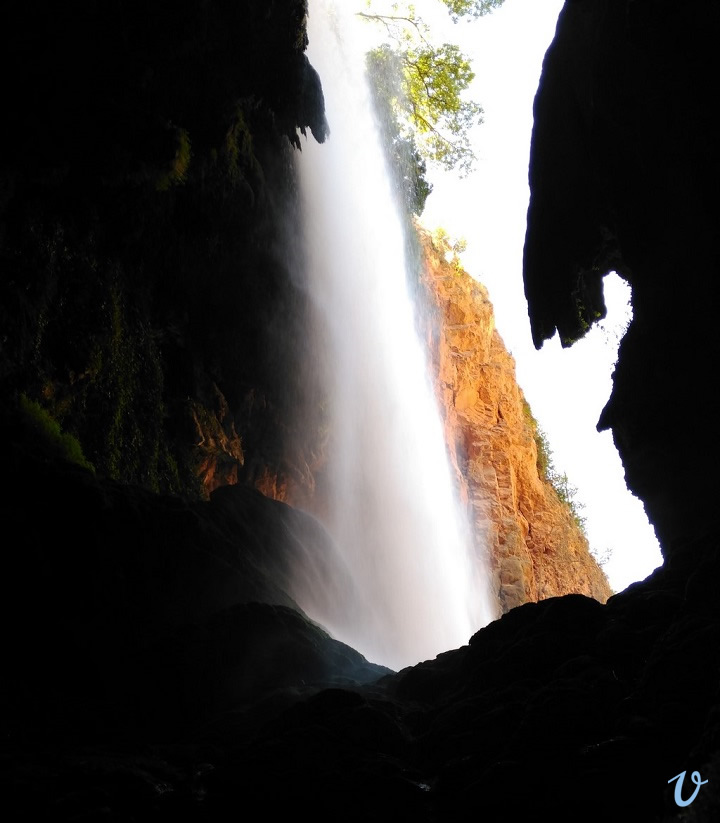 The next stop that amazed me was the Mirror Lake , where the fish seem to be suspended in the air. It is not surprising that they gave it that name, since the water is so clean that your face is reflected quite clearly. Next to it is the fish farm that I mentioned earlier, where trout are the main protagonists. 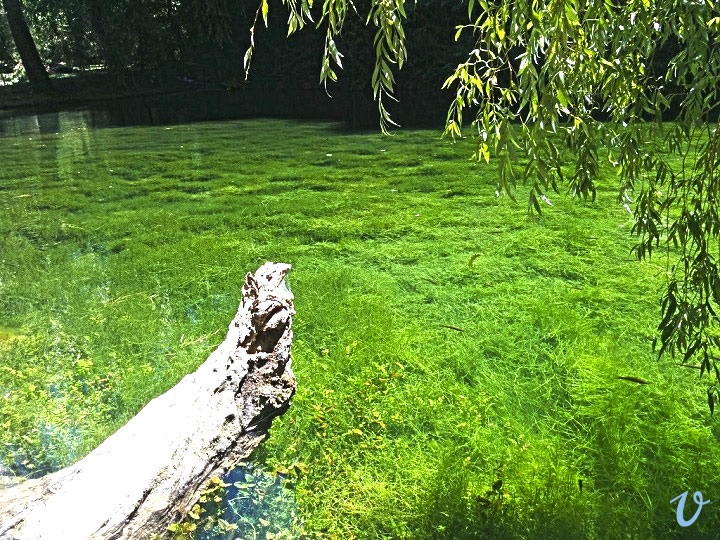 The landscape that surrounds the Mirror Lake made me feel like in the United States, as if I was in front of the Hanging Lake of the Grand Canyon of the Colorado. Its biological richness and the great variety of trees place you in an intoxicating green and crystalline paradise . 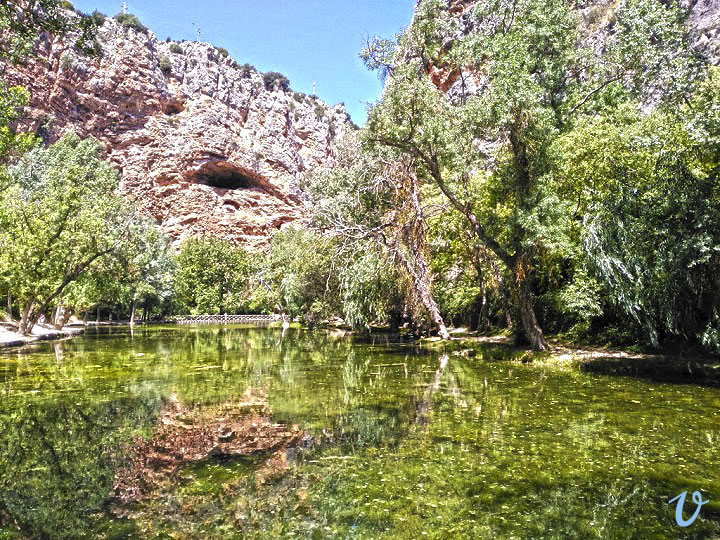 In short, a visit to the Park is essential. It is not surprising that in 1945 it was declared a picturesque landscape . Dense forests, gigantic trees, hundreds of species of animals and plants … You have to be there to tell about it.

For more information and reservations visit the website of the Monasterio de Piedra. 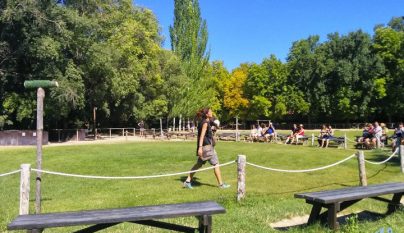 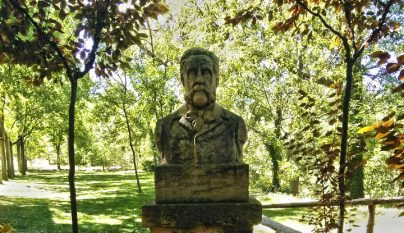 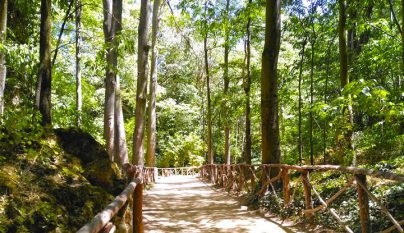 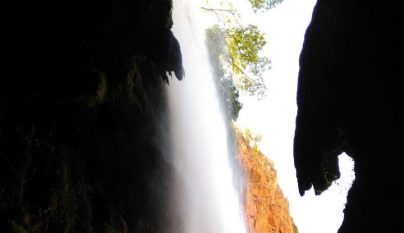 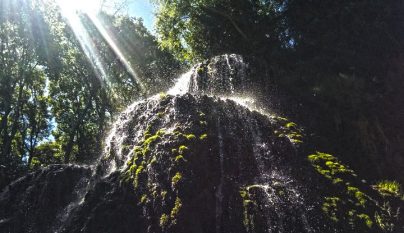 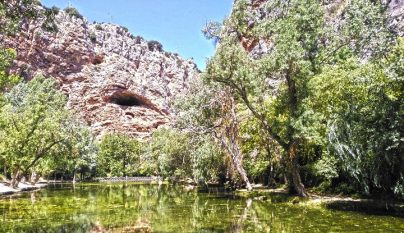 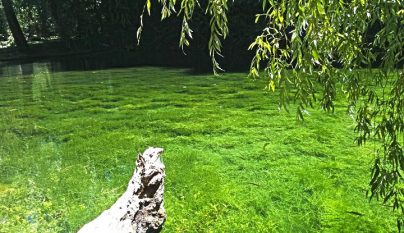 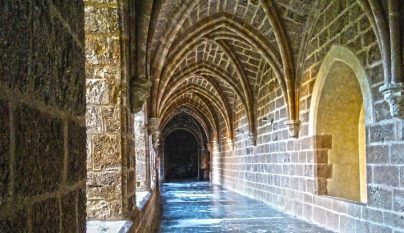 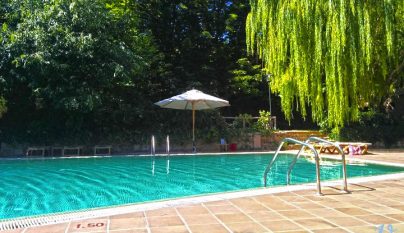 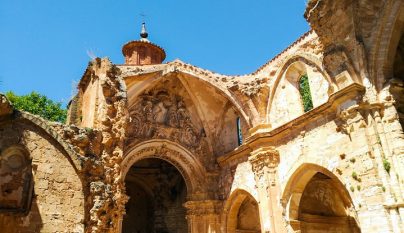 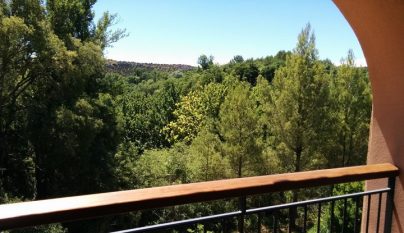 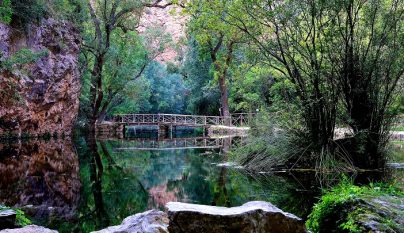 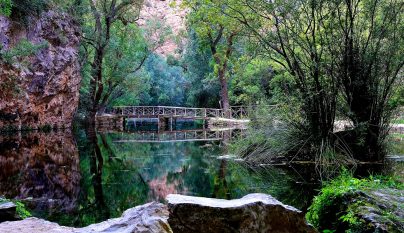