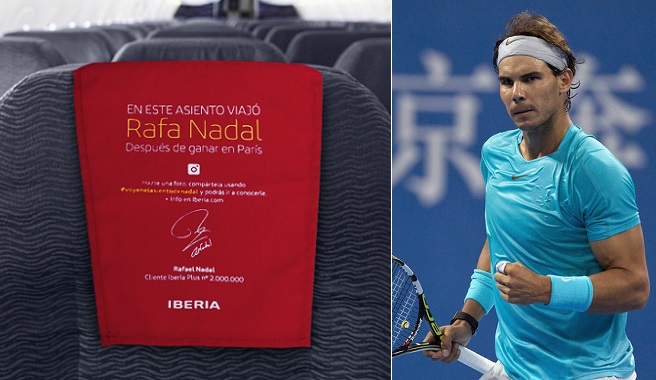 If you are a Rafa Nadal fan, you are in luck, because throughout the month of November Iberia will offer the possibility of traveling in the seats in which Rafa Nadal has traveled after winning some of the most important tournaments.

As a special tribute to our most international tennis player and one of the best Spanish athletes of all time, the airline company has identified with a commemorative headrest all the seats of the company’s planes where the Manacoran has traveled. In addition, Iberia has launched a contest aimed at tennis lovers and Nadal fans.

The prize of this contest via Twitter is a trip to Palma de Mallorca on a company flight, from where they will travel to Manacor to attend Rafa Nadal training and meet him personally, in addition to receiving a signed detail from him.

How to take part

Participating is super simple: Iberia followers on Twitter should look, when they get on board the company’s planes this month, for the headrest that indicates that this is Rafa Nadal’s seat, take a photo and upload it to Twitter mentioning the profile of Iberia (@iberia) along with the hashtag #voyenelasientodenadal . Another way to participate is by posting a tweet from your personal profile mentioning @iberia along with the same hashtag and adding a tweet of support for the tennis player.

On the other hand, Iberia Plus holders may register for the contest through their personal Iberia Plus area or the email they receive with information about the contest. At the beginning of December a raffle will be held between the participants and the winners will travel to Palma de Mallorca. Do you want to be one of them?

📖  Go to work in Germany