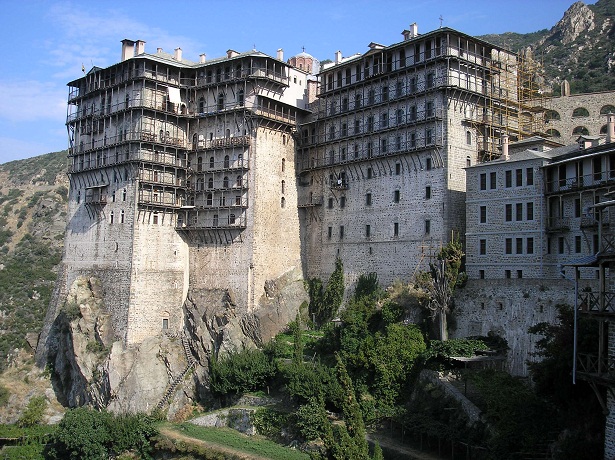 The Monastic Republic of Mount Athos is a reminder of the times of the Byzantine Empire in present-day Europe. Twenty Orthodox monasteries are grouped in a Peninsula without land access to which you can only reach by sea and where for a thousand years no woman has been allowed to enter . They do not know what they lose. Therefore, if you are a man, you are lucky . Jumping aboard the ship in Ouranópolis is to undertake a journey to ancient medieval Europe that was frozen in time. It is like a pilgrimage to the only place in the Mediterranean that has maintained the monastic tradition of the ancient hermits. Continuing with the boat tour, you will find some monasteries along the way: Dochiatiou , Xenophontos … They all seem spectacular fortresses between the sea and the bush, authentic spiritual fortresses to shelter from the madding crowd.

From the port of Dafne , a path leads you to Karyes , the capital of the Republic, the seat of the authorities, at least the most important. There you can start visiting the monasteries , stay in them and share food and tasks with the monks, an incredible adventure into the unknown where you will discover a most special world. Walk from monastery to monastery along centuries-old paths , admire its ancient architecture, get lost in intact forests and feel small before the mass of the mountain and its incredible history. Some of the monasteries preserve Byzantine treasures and unique relics such as the clothes that the Virgin wore at the time of the crucifixion.

📖  The island of Poros in Greece

At the end of the Peninsula, some sixty kilometers long, the imposing Mount Athos rises from the sea, a great rocky pyramid that is about two thousand meters high. Everything is different there, even to know the time. There the days begin when the sun sets.