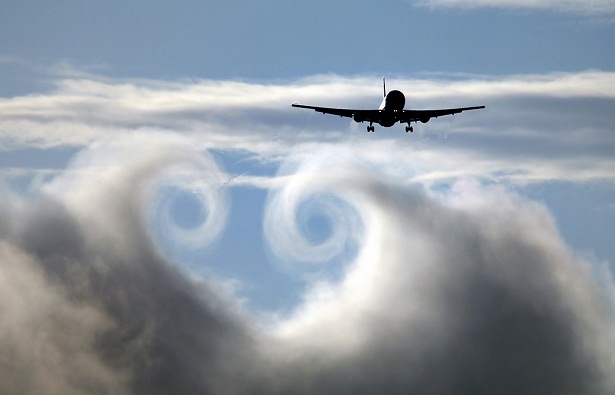 Turbulences are the great annoyance in any plane trip we do, and many times it is difficult to understand why they happen, what they are like and, above all, what danger they have. Today I will try to clarify what the types of turbulence are and their causes . Let’s start with the intensities of the turbulence :

– Light turbulence : these are the briefest and cause erratic changes in the altitude or position of the aircraft.

– Light chop : they are small, soft, fast and somewhat rhythmic jumps but without there being any change in the altitude or operation of the plane.

– Moderate turbulence : they are similar to light but with a greater intensity. There are changes in the altitude or position of the plane, but don’t worry, the plane maintains control at all times.

– Moderate chop : similar to light chop but with moderate intensity. They are several fast jumps with no changes in performance or altitude.

– Severe turbulence : things get a bit complicated here, although not excessively. The changes are abrupt and sudden both in the altitude and in the operation of the airplane, in addition to that the speed undergoes great variations. The plane may be temporarily out of control.

– Extreme turbulence : nothing to do. The plane is violently thrown and its control is impossible, and can also cause damage to the structure of the ship. Do not panic, to run into this you have to get in the eye of a hurricane or travel in the Oceanic 815 from the Lost series.

Obviously the turbulence is determined by a series of causes, that is, the plane does not shake suddenly and just because. The main causes of turbulence :

– Thermal : the heat of the sun causes the masses of hot air to rise and those of cold air to fall.

📖  The first woman to travel all the countries of the world

– Air flows and currents : when there are sudden changes in air currents at high altitudes that affect the nearby air.

– Mountains : the air passes over the mountains and causes turbulence when it meets the air coming from the other side.

– Wake turbulence : these are caused by being close to another plane or helicopter close to the ground. That is why whenever it is going to take off or land it is agitated more.

– Microbursts : a storm or other plane generates an atypical current near the ground.

If you are one of the people who have enough respect or fear of traveling by plane, at least now you know why there is turbulence , it will surely help you to cope better.