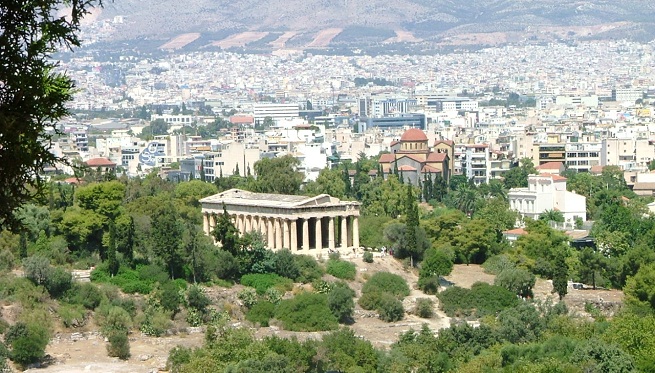 Hephaestus is the Greek god of fire and volcanoes. He is also the God of all craftsmen and blacksmiths. It is the equivalent of Vulcan (the Roman god of fire) and Agni (the Hindu god of fire). The hammer, anvil and pincers are its symbols. He was adored by all the artisans of Athens . Hephaestus is the only Greek God who looked grotesque: he was lame and crippled, his feet were misshapen.

The temple of Hephaestus and Athena Ergane, is situated on a hill overlooking the ancient Agora in Greece. It is one of the classical Greek temples. It was built in 449 BC, and today it is almost completely intact. The columns , the roof and the fronts are perfect. As Theseus (a hero and king of Athens) was believed to have been buried in the temple, he is also known as Theseion.

The temple is believed to have been designed by the architect of the Parthenon . It is a peripheral temple with a Doric style. The east and west sides are shorter, have six columns, while the north and south sides are longer, with a total of about 13 columns. Marble is the main material used in its construction.