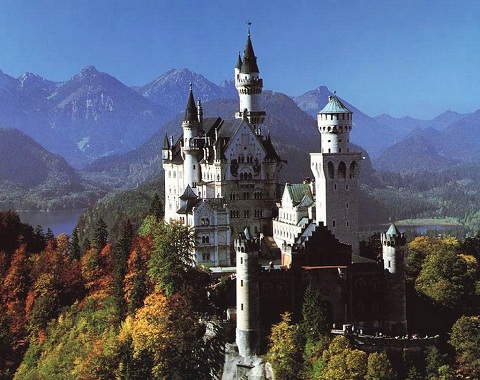 Its image, its wonderful landscape and its architectural beauty in stone make this place one of the most beautiful tourist destinations in Germany . Neuschwanstein Castle is one of the best known Neo-Gothic castles and is located in Bavaria , near Fussen. A region surrounded by old castles and monasteries. The whole region is also surrounded by the impressive and beautiful mountains of the Alps, waterfalls and lakes.

Louis II of Bavaria had it built in 1866, and since then it has been one of the most visited and most photographed tourist destinations in this country. Its name means "new stone swan". It was named after the Swan Knight from Wagner’s famous opera. Its architect was ordered to build a castle that on the outside resembled those in fairy tales but on the inside had all the technological advances of the time.

Thus was born a castle of pure fantasy , since the time in which it was built was not necessary from a strategic point of view or castles or fortresses. A romantic and beautiful construction in harmony with the mountains and lakes that surround it. The castle evokes the image of a splendid swan on the waters of the lake at its feet.

Thus the castle is reminiscent of traditional Disney tales. In fact, this was the model chosen by the company to make the castle of "Sleeping Beauty" in 1959. What’s more, in the Disneyland Resort Paris park we can even find a replica of this castle.