Portugal is one of the countries that for some years has become fashionable for tourism due to its great beauty, the attractiveness of its tour packages and prices that are quite affordable for most budgets. In addition, in the case of Spain, the fact of geographical proximity is added. However, many times, they tend to do the usual itineraries, visiting Lisbon, Sintra, Porto or Estoril, among other places. To a lesser extent, it stops in a small town , but it has a lot of charm. It’s about Óbidos . A medieval town, but one that is the clearest example of a Portuguese village. It is a place with a lot of history and a lot of charm . And, although it is thought that it has few places to visit, it is not true. It is well worth spending a day on it at least. In addition, you should not leave the place without trying the Ginjinha d’Obidos.

The Óbidos landscape is easily recognized because it is a walled city . Its history dates back to the year 1,214, when it was a gift to the Queen of Portugal on her wedding day, thus beginning the tradition with Queen Urraca, which lasted until the 19th century.

This wall contains narrow cobbled streets , they are almost like a labyrinth, which are well worth a walk to see the traditional and typical painted houses of the place. A path that leads to the medieval castle of the city, which is very impressive.

But before getting there, on the Óbidos tour, one of the obligatory stops is called La Porta da Vila , which is the main entrance to the municipality. Initially, it seems very simple, but you have to look closely because inside there is a chapel of great beauty that rises above the main street. 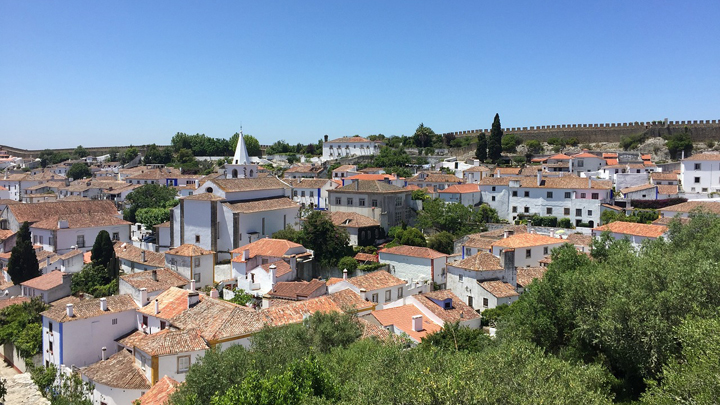 Of great beauty are its blue and white patterned tiles , which still survive from the 18th century and represent the passion of Christ , while the ceiling evokes the crown of thorns that Jesus wore.

In addition to this gate, the visit to Óbidos should lead us to get to know its walls well – they date back to the Arab period and the 8th-11th centuries – which can be traversed. They more or less have a perimeter of 1.5 kilometers around the town, although it must be taken into account that, in some sections, they reach a height of about 13 meters .

A must-see is also the Óbidos Castle . In medieval style, it stands out for its solid and strong stone walls and for the keep , as well as for the defensive battlements .

Inside the town, the tour takes us for a walk along Rua Directa , which is the main street and which, nowadays, is full of shops and craft stalls. It is a very happy and lively road, as well as being one of the busiest streets, especially during the tourist season.

Other points of interest in this town of Teruel are the Church of Santa María , which is the main one and stands out for its Renaissance style – it also has Gothic art – and the Pelourinho de Óbidos , which is a stone pillory that is in the square. Santa María and that it was used to hang criminals.

And, of course, it is convenient to visit the Santuario do Senhor Jesús da Pedra , which is outside the walls and whose main attraction is its hexagonal plan, as well as the aqueduct so that the town had water; the Church of Sao Pedro , in the Gothic style, although Baroque was included in its reconstruction, and the Capela de Sao Martinho , which is Gothic. And, if there is time, there is the municipal museum with sculptures from the 15th-17th centuries.

The gastronomy in Óbidos is like that of Portugal. But there is a product that you cannot stop trying. It is known as Ginja or Ginjinha d’Obidos , which is a cherry liqueur , which is sold in many bars and stalls. In addition, it has the peculiarity that it is served in a glass of chocolate .