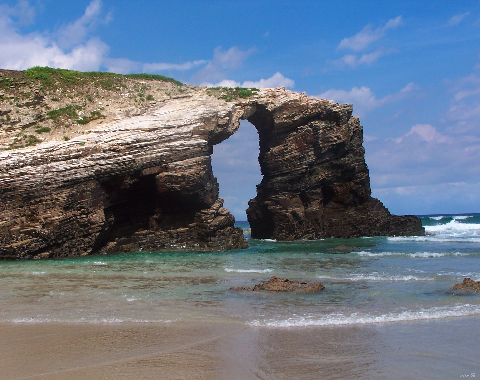 Las Catedrales Beach, in Galician As Catedrais, is the tourist name by which the Playa de las Aguas Santas is known. The appearance of its cliffs is responsible for this place being known by that name. It is located on the Galician coast of Lugo , specifically about ten kilometers west of the municipality of Ribadeo , on the Cantabrian Sea.

Declared a Natural Monument by the Ministry of the Environment of the Junta de Galicia, its arches and caves are what makes it different. They are appreciable on the beach, but only at low tide. When the tide is low it is the best time to contemplate from the sand the magnitude of its cliffs and its sea caves. Some caves from which you can appreciate the various formations that it has acquired mainly due to the erosive action of sea water and waves.

However, the charm of the place is such that it is still interesting to see the beach at high tide. With high tide the beach becomes small, although it is still suitable for swimming. It is then when you can access a long sandy area that is delimited by a huge wall of slate and schist. A rocky wall that is eroded in a unique way. The arches of more than thirty meters high that have been formed are those that are reminiscent of the flying buttresses of the cathedrals. Hence the name of Playa de las Catedrales.

But that’s not all. Huge corridors of sand between the rocks and caves of tens of meters, complete the majesty of the place. It is also interesting to travel in a west-east direction the upper part of its cliffs. A beach without a doubt different and therefore beautiful.

📖  Get to know the Seven Natural Wonders of Spain