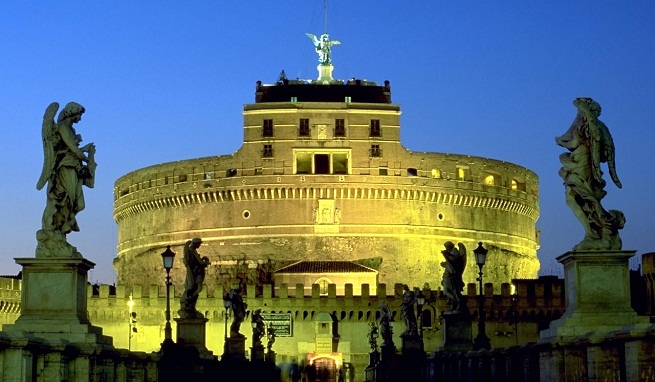 One of the most charming European cities is Rome , and a good example of this is the number of visitors from all over the world that it receives at any time of the year. The most attractive thing about the Italian capital is the large number of historical monuments it has, many of them truly spectacular and worth visiting.

Today I would like to recommend a visit to the Castillo de San Angelo , which is also known as the Mausoleum of Hadrian and has a very original design. Its walls form a curtain in the interior room, with medieval elements that give it a unique appearance. A perfect example of the Renaissance thanks to its threshold, a round tower, the large amount of marble it has and, of course, many statues.

The tower was originally the base of a statue of Hadrian , but was later replaced by a bronze angel, which also gave the castle its name. Especially beautiful is the moat, which has a lot of trees and is completely covered with grass since it was converted into a public park a long time ago. There you can see many families going for a walk or lying on the grass to enjoy the good weather.

Many of the castle rooms are closed but there are some rooms that are always open to the public to offer various exhibitions, almost all of works of art. There are other parts of the castle that open occasionally when a special event or exhibition is organized.

This castle is in a fantastic setting, on the right bank of the river Tiber and opposite the Saint Angelo bridge, very close to the Vatican. Its interior can only be visited during the day but the exterior is best enjoyed at night, all illuminated and truly beautiful.