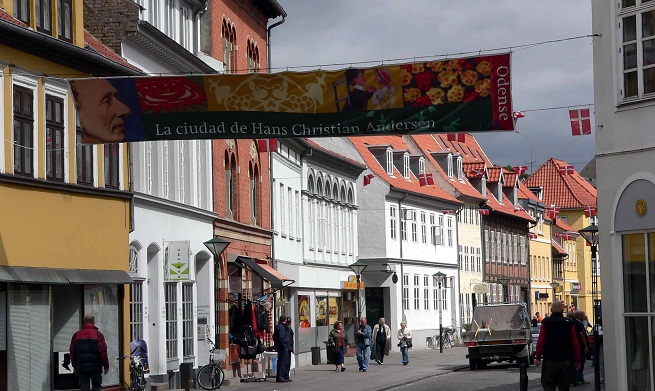 Denmark seems to me to be a super interesting country, perhaps it does not have the fame of other European countries such as France, England, Italy or Germany, but the truth is that it has charming cities where you can find many things of great interest. A relative recently made a trip to that country and was delighted with what he discovered, so I have decided to write about it to see if his recommendations will be useful to anyone.

Specifically, I am going to write about Odense , the third largest city in the country and only surpassed by Copenhagen and Aarhus. Its name comes from the god Odin, a god from Danish mythology. From there they were illustrious characters such as the writer Hans Christian Andersen. In the year 1020 it was the episcopal see of the country and in 1086 it suffered one of the most tragic events in the history of the country since there he was assassinated in King Canute IV after the inhabitants of the city revolted by not wanting to pay taxes. of the church.

This fact also made Odense a place where many visitors began to arrive, being also one of the oldest cities in the country since in 1988 it celebrated its 1,000 years of antiquity . Odense is in the northwest of the island of Fyn and on the banks of the river of the same name. Its old part is spectacular, making a beautiful contrast to the modern neighborhoods that surround it. 3 of the most outstanding monuments of the city are religious: the Cathedral of San Canuto , the Church of Our Lady and the Church of San Juan.

The Castle of Odense is also beautiful , which was built in 1720 and which together with several museums house the most important of the history of this city, being also the places with the greatest cultural interest. The House of Hans Christian Andersen stands out , converted into a museum after his death and in which many personal objects of the writer can be seen, as well as several manuscripts and illustrations of many of his works.

📖  The best card to travel around Europe